Billed as “Something for Everyone to Love”, Drupal 8 is now in Beta testing and we are expecting the release of a final version soon. 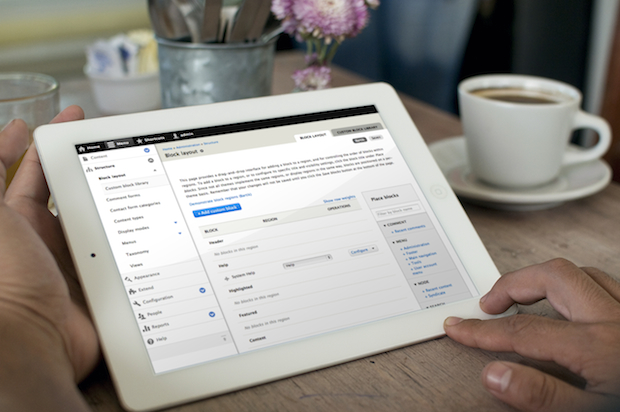 The new release clearly owes a lot to WordPress, and this is no bad thing. WordPress is rightly praised for its ease of use, and conversely the opposite always been the first thing people say when they start to use Drupal. So from a user perspective, the new design and associated features such as the mobile admin interface can only benefit the Drupal community.

What has caused some controversy is the move to a completely different coding methodology (Drupal 7’s procedural code versus object-oriented programming (OOP) in Drupal 8). What’s the problem? It means developers have some work to do to migrate modules and themes to work in Drupal 8. Drupal is often used for enterprise and/or complex bespoke sites that have undergone a lot of customisation work (always one of the strengths of Drupal) and the coding change will result in a lot of work before an upgrade to the new version is possible.

However it is worth remembering that the previous major version change (from 6 to 7) was also a big jump (and has even resulted in many, many Drupal sites remaining on version 6).  A similar effect can be found in Joomla, with Joomla 1.0, 1.5 and 2/3 being majorly different from each other, with no simple upgrade available.  Only WordPress seems to have escaped this painful process so far. Perhaps WordPress benefiting from coming to the party later and learning from these other established CMS’s growing pains.

Mobile in its DNA

Deploy content once and watch it display the way you want on any device.

Translate anything in the system with built-in user interfaces.

Build mobile apps with Drupal as the data source, or even post back to Drupal from the client.

Use the WYSIWYG editor and in-place editing to quickly create formatted content and make changes on the fly.

Views, Out of the Box

The page markup in Drupal 8 is now HTML 5-based. Each output template has simplified elements and classes with native input tools for mobile fields like date, email and phone.

A year on year comparison shows why Drupal just might be making radical changes (click to enlarge slide):

Whilst WordPress continues to grow, Joomla more or less holds it position but Drupal is clearly losing share. Is the drop due to the uncertainty over what Drupal 8 would hold, or is it the end-users are switching to easier to use CMS systems and this downswing is temporary and the new look D8 will win them back?

2020Media will be watching developments and will keep you updated.

One thought on “Drupal 8 is coming”